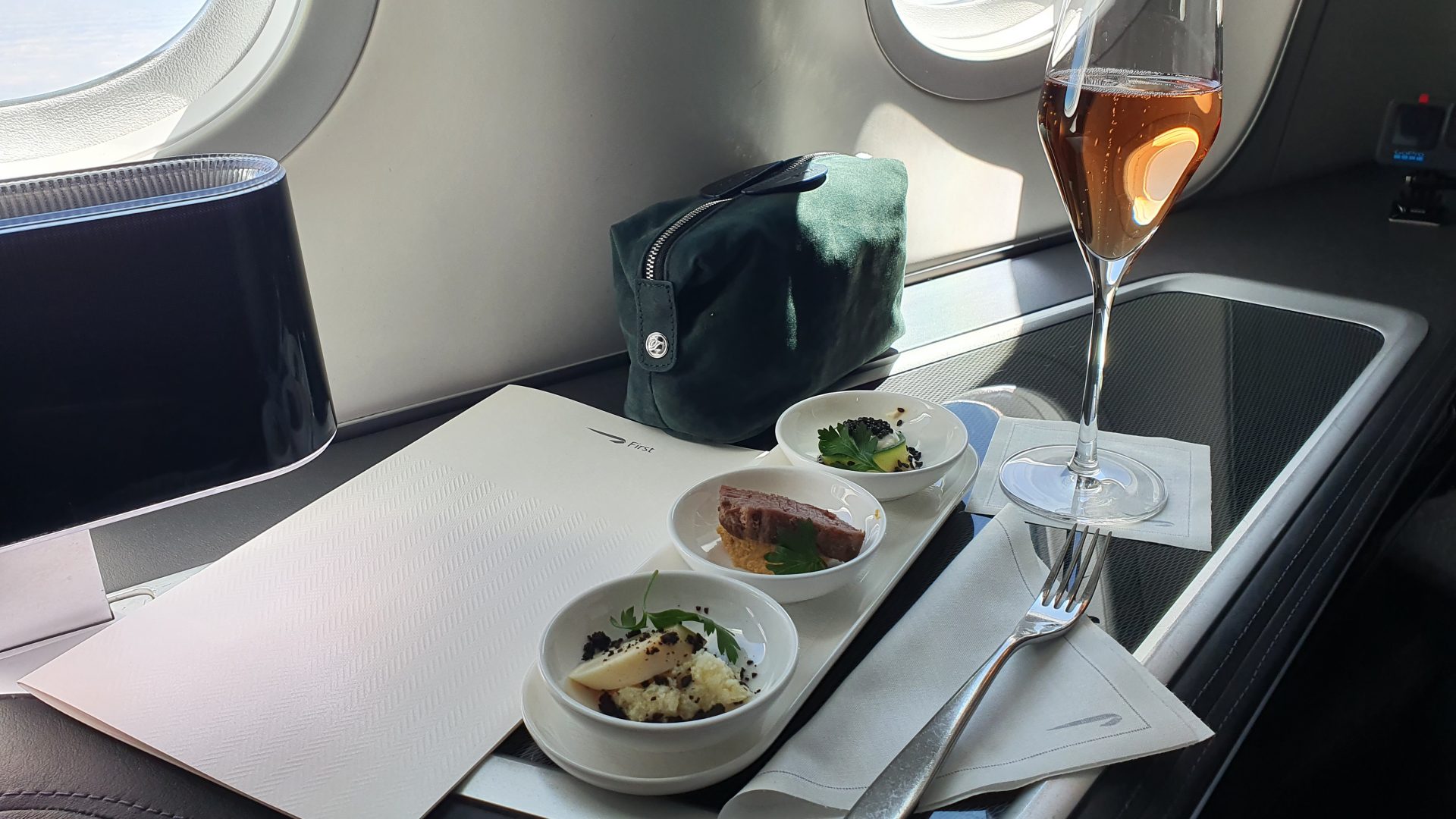 Welcome to a British Airways First Class Santiago Chile To Heathrow review in one of their longest flights in the network!

So I decided to focus on work for the summer and took a break from travelling altogether for 2 months. I was mostly off-grid during this time too and deleted Instagram from my phone ( I may write a separate post on this, because boy it was needed ) All this means off course that I am very behind from doing some of the posts I planned from spring travels. Before my autumn/winter trips kick in in earnest, I want to write up at least some of those trips.

Back in April I travelled to Brazil, flying out with AeroMexico’s 787-9 Business Class. For the return I wanted to fly what is BAs longest non-stop flight blocked at over 14 hours, so was happy to do a slight detour and visit Santiago for a few days again. I have flown this exact same 787 First product to Oman 4 years ago so I wanted to see how the product was holding up and how the service might differ given the ultra long haul status of this flight.

I arrived in Santiago airport just after 10am and check in was well underway. I had very low expectations of lounges in Santiago Airport (given my visits in 2019 where I found all their lounges to be subpar). So I had no desire to check in early.

Santiago is not an especially large airport so its easy to find your way around quickly. BA check in operates from Zone F.

Unlike the First Class check-in experience you will have at Heathrow using the separate Wing section of T5, the outstations just have a different lane for First & BA Gold/OneWorld Emerald. There were a couple just before me but it didn’t take more than a few minutes.

Still somewhat of an underwhelming experience that unfortunately many other top airlines do not better in this respect.

Along with my boarding pass, I was handed an invitation to the Pacific Club lounge. As expected it was nothing to get excited about!

I should add, at this time they were still crowd controlling and a priority pass members were being turned away! Yes in spring of 2022, I still had to take a PCR test in Brazil before entering Chile for a few days!

Anyway this is what the lounge looked like inside and wasn’t much bigger than the picture. As for the food and beverage? Very much like any a shabby business class lounge would be a best way to put it. I just had a juice and some pretzels.

Just before I entered the lounge, I got a glimpse of our aircraft being prepared..

With about 50 minutes to departure time, I left the lounge and just wandered around for a while before heading to the boarding gates.

Despite the fact that our aircraft had been sitting in the apron for several hours after arriving early on its inbound flight, boarding was rather haphazard. Initially it still had LATAM signposts in our gate with LATAM specific boarding groups, so no one knew which lines were which until the BA agents sprang into action to replace them with BA boards!

I would have guessed the flight was about 80% full but heavily skewed to the the premium end. Group 1 boarding seemed like almost 30% of the passengers today. With everyone patiently waiting on their lanes and flight time fast approaching, there was still a delay in boarding. Then it become clear why. The crew were late arriving in from their hotel!

Boarding finally began with just 10 minutes to our scheduled departure!

As I stepped into the aircraft through door 2, I was  welcomed by 3 rather cheerful flight crew, 1 whom proceeded to escort me to the First Cabin, past the mini business cabin and into my seat…

I just about managed to be the first passenger in the cabin, so had about 20 seconds to try and take some snaps of the cabin

Though this new product debuted 5 years ago now, the cabin looked fresh and still showed the understated elegance it had when I first flew it.

Storage options are aplenty in these First Class seats..

Looking after us today in First was Grace, the Cabin Service Manager, Emily, who escorted me to my seat and Eileen . As I was settling in, the Emily asked what I’d like to drink to start. I went for Champagne which was Laurent-Perrier Grand Siècle British Airways has been serving for a long time now.

She then handed me the amenity kit and PJ set by Temperley London.

Already placed in my Suite was  noise-cancelling headphones and a lighter blanket for lounging in.

I unpacked the very velvety leather amenity kit while enjoying my drink..

As you can see the amenity kit contents were substantial. It had everything you could need with a moisturizer, hand cream, face wipe, lip balm and pillow mist spray all by premium brand Elemis. In addition it included a deodorant stick, eye shades and ear plugs, a dental kit, a comb, flight socks and finally a BA branded pen!

In my last BA First flight the products were from Refinery, and I did prefer their moisturizer more.

During boarding I had a top of the champagne. The captain informed us of the flight details today and though we were taking off 45 minutes past our scheduled time, were expecting an onetime arrival.

There was a total of 6 First Class passengers today, leaving the two middle seats next to me free.

Not more than 10 minutes after takeoff the crew we readying for service ahead of the long flight to London.

The CSM reiterated that the service in First was completely on demand, so I could eat lunch/dinner and breakfast as and when I was ready. I then took the chance to inspect the menu, while enjoying my first take off drink.

For reference the menu for this flight was as follows:

I decided on the courses and asked to be served about half hour later.

This looked wonderful from the plating and presentation right down to the quality, and I enjoyed every bite. What a fantastic way to start a meal!

Next up for the appetiser course, I chose the citrus marinated smoked salmon. At this point I switched back to the LPGS champagne..

This was served with warm fresh bread and was still light and enjoyable.

And finally the main show, grilled tenderloin of beef served with roasted herb tomato, red onion and fresh rocket. With the main, I also ordered a side of sweet potato mash..

and the beef was just incredible, tender and juicy with lively flavours. It was simply exquisite!

I didn’t specially want to order a dessert after but couldn’t help ordering some truffles alongside the cheese.

The whole dinner service was super attentive and polished. With just the right amount of attention to detail and presentation. Each of the crew also appeared to be very knowledgeable  about the menu and wine and proactively checked up on the meal and the drinks as well as clearing the plates in a timely way.

After the almost 2 hour meal, I spend about an hour just lounging and finishing the movie I eventually decided on about half way through the meal.

The 23″ fixed HD screen still looked solid and the quality and choice of movies, documentaries and series was more then plenty to enjoy multiple 14 hour hops with BA. The “New Releases” looked moderately interesting but I cannot say anything jumped out as a must watch during that time.

I liked the subtle mood lighting in the suite as well as the rest of the cabin. While the IFE screen is touchscreen, you also have an IFE controller on the side panel beside the seat..

What I found rather surprising is just how battered this controller looked. I mean I was somewhat puzzled what happened here? It looks like the thing has been battered around abit but yet its attached in a way that it wouldn’t be easy to drop it on the floor. Anyway, it was still perfectly functional.

BA First passengers also get free unrestricted WiFi throughout the flight and was easy to connect to should you wish to stream your own content or just do some work instead.

About 4 hours into the flight, I decided to get some sleep. While the timing was slightly off due to being very early evening, I had a couple of weeks of late tiring nights in Brazil, I need to catch up on sleep.

I asked the crew to make my bed, while I went to change into the Temperley London loungewear provided.

The First Class Seat converts into a 6 foot 6″ length bed and sitting flush against the side storage panels it went comfortably wide at the shoulder length and had unrestricted leg space.

This is all topped with a quilted mattress pad, plush duvet and pillows & luxurious 400 thread count coverings..

And this is the point where I really appreciate that lamp which creates just the right ambience before going to bed.

I slept well mostly with just one bout of interruption due to turbulence and woke up naturally after about 7 hours.

I woke up with still 2 hours to go and it was still pitch dark outside after undimming the windows. It would have been around 4am UK time.

I was still somewhat tired, but I decided to lounge around for about 20 minutes before ordering breakfast..

To start I ordered a smoothie, bircher muesli and fresh fruit

This indeed proved a refreshing way to wake up! For the main, I opted for a full English, well adjusted without the bacon…

The vegan grilled sausage, scrambled eggs and hash browns were perfectly done and felt like a good hearty breakfast.

I finished off breakfast with fresh coffee and some more pastries from the basket. And it was lovely to watch the gradual sunrise.

We landing on a clear beautiful morning and deboarded swiftly. I stopped by British Airways First Class arrivals lounge in T5 for a shower and then brunch! I will review that separately if I get a chance!

Stepping into this flight I was looking forward to enjoying a full service given the 14 hours block time but in total our flight time was just over 13 hours and 7 of those I slept in, there was still 6 hours to enjoy two substantial meals. I have to add that the catering out of Santiago was simply superb and I wasn’t expecting that.

All the crew were wonderful and friendly. I had a nice chat with all 3 at different points and it goes a long way to establishing a relaxed enjoyable atmosphere. I really cannot fault anything about the service, it was every bit as First Class as you would expect with any top airline (admittedly heaps and bounds better than my experience with Lufthansa First class). Through all this, somehow 13 hours felt rather short!

I should note British Airways is updating to a new First Class more or less based from this product, but with added doors and also thankfully adding the window blinds back from the old First cabin which definitely added a nice more personalised touch to the product.

4.6
Skip back to main navigation